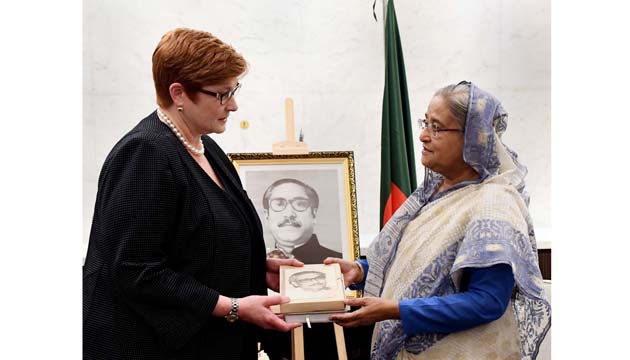 Visiting Australian Foreign Affairs Minister Marise Payne on Thursday said Australia will continue to provide strong support to Bangladesh over Rohingya issue as they want the displaced people to return to their own country.

Marise Payne said this at a meeting with Prime Minister Sheikh Hasina at hotel Inter Continental in the city.PM’s Press Secretary Ihsanul Karim briefed reporters after the meeting.

“We would like to stay in touch on this issue,” the Australian minister was quoted as saying.Marise Payne informed the Prime Minister that Australia will enhance its contributions further to this humanitarian issue and appreciated Bangladesh for giving shelter to a large number of displaced Rohingyas.

She also appreciated the Prime Minister’s role in women empowerment and said she herself a fan of cricket like the Bangladesh Prime Minister. She said her country wants the Australian cricket team to visit Bangladesh as per schedule.

Prime Minister Sheikh Hasina said Bangladesh has given shelter to 1.1 million Rohingyas on humanitarian ground, and Bangladesh and Myanmar signed agreements over the repatriation of Rohingyas, but the deal is not being implemented because of the reluctance of Myanmar authority.

Noting that Rohingya issue is a big burden for Bangladesh, she said some 100,000 babies were born by the time at Rohingya camps in Cox’s Bazar.

At the meeting, the heads of the delegations said they will extend support to the Dhaka declaration as there had been very vibrant discussion at the conference.

The Prime Minister said this conference will add a new dimension to the forum.

The people of Bangladesh, living in six seasons, are facing the furry of natural calamities like cyclone, flood, tidal surge and river erosion, she said.

Sheikh Hasina said her government has taken measures to combat the natural calamities.

She said artificial mangrove forests are being developed at the coastal belt to protect the lives and property of people from natural disasters.

Assuming power, her government took various preparedness measures to prevent loss of lives and property during the natural calamities, she said. 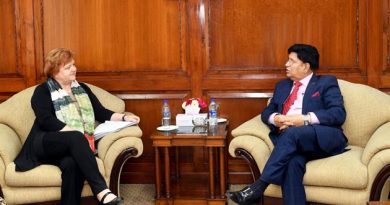 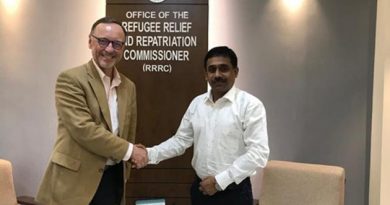 Netherlands Ambassador to Bangladesh announced an additional 5.9 million euro of Dutch funding to help both the Rohingya and their host communities in Cox’s Bazar.

Embassy of the Republic of the Philippines to Bangladesh has handed over a credentials letter to Today’s World News 24.