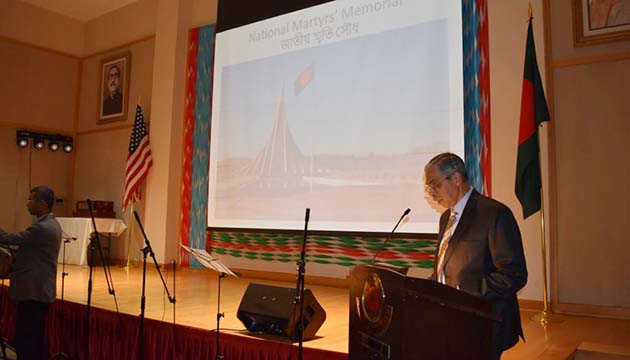 The Bangladesh Embassy in Washington DC  celebrated the 52nd Victory Day of Bangladesh, remembering the valiant Freedom Fighters who fought and made the supreme sacrifice for the cause of the long-aspired independence of the Bangalee nation.

To commemorate the glorious Victory Day, the Embassy arranged a daylong program. The day’s first part of the program began with the hoisting of the National Flag ceremonially on the chancery premises in the morning by Bangladesh Ambassador to the United States Muhammad Imran. Officials and employees of the Embassy were present at that time.

Later, the Ambassador along with officials and employees of the embassy placed a floral wreath at the bust of Father of the Nation Bangabandhu Sheikh Mujibur Rahman at the Bangabandhu Corner of the Embassy. 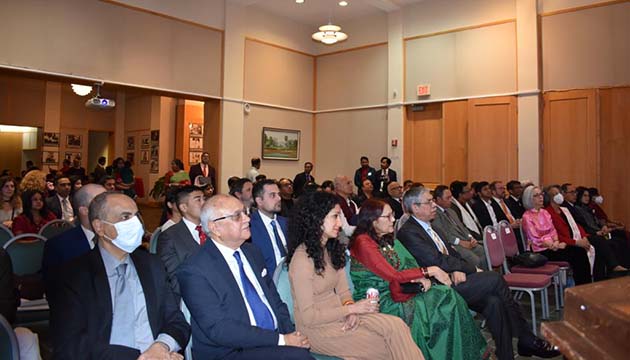 A special prayer seeking continued peace, progress, and development of the nation as well as eternal peace of the departed soul of martyrs of the Liberation War and Bangabandhu Sheikh Mujibur Rahman was offered.

In the second part of the program, a discussion session highlighting the significance of the day was held at the Bangabandhu Auditorium in the evening. 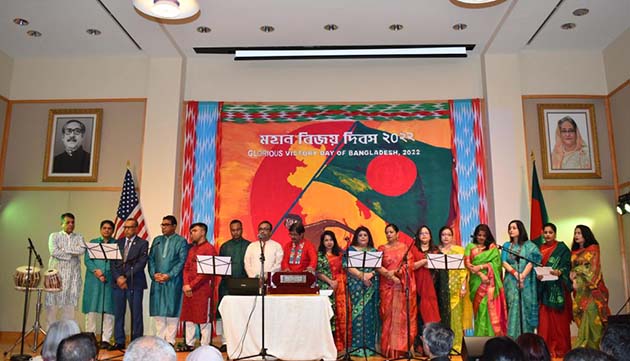 Bangladesh Ambassador to the USA Muhammad Imran and Deputy Assistant Sectary in the Bureau of South and Central Asian Affairs (SCA), US Department of State, MsAfreen Akhter delivered their speeches at the discussion.

Ambassador Imran, in his welcome remarks, extended heartfelt greetings to the countrymen and expatriate Bangladeshis on the occasion of the great Victory Day.

He recalled with profound respect the greatest Bengali of all time and the founding Father of Bangladesh Bangabandhu Sheikh Mujibur Rahman. He also paid deep homage to three million martyrs for their supreme sacrifices and two hundred thousand women dishonored during the Liberation War.

The Ambassador said the Victory Day is a glorious day for the Bangalee nation. On this day in 1971, the Bangalee nation, under the undaunted leadership of Bangabandhu, achieved the ultimate victory after 23 years of intense political struggle and the nine-month-long War of Liberation, he said.

Ambassador Imran called upon all to work from their respective position under the leadership of Bangabandhu’s able daughter Prime Minister Sheikh Hasina for building a hunger-and-poverty-free happy and prosperous Bangladesh as dreamt by the Father of the Nation and three million martyrs.

Afreen Akhter, in her address, said the United States sees Bangladesh as a truly important strategic partner and looks forward to the next 50 years of strong relationships.

She said in the last 50 years Bangladesh-USA relations have seen incredible progress between our peoples, economies, and governments. The people-to-people ties between the two countries are very deep, Afreen Akhter noted.

Praising Bangladesh’s progress in different sectors, the US Deputy Assistant Secretary said Bangladesh’s economy has expanded to a largely agricultural society to an economic powerhouse over just a few decades.

This is a story to really be proud of Bangladesh has lifted millions of people out of poverty and the country will achieve middle-income status within generations which is truly remarkable, she said.

Beyond the economic cooperation, Afreen Akhter mentioned the close partnership between the two countries in providing COVID-19 vaccines and addressing climate change issues. She thanked the Bangladesh government for hosting a huge number of displaced Rohingyas.

The day’s program ended with a colorful cultural function. Embassy officials and their spouses performed patriotic songs at the event, while James Brennan Flanigan of the US State Department recited a poem of leading poet Shamsur Rahman. The artists of Dhroopodi, a Bangladeshi-American cultural organization, performed group dances on patriotic songs.

Ambassadors and senior diplomats from different countries, senior officials of the US government and members of the Bangladeshi diaspora, and family members of the officials and employees of the Embassy were present on the occasion. 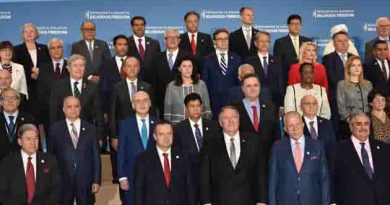 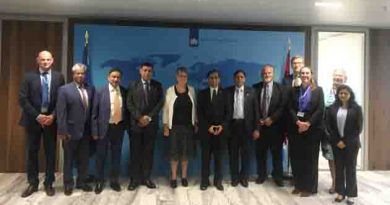 The Netherlands reassures support for the implementation of Bangladesh Delta Plan 2100. 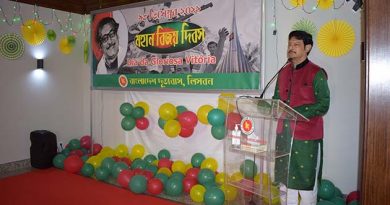