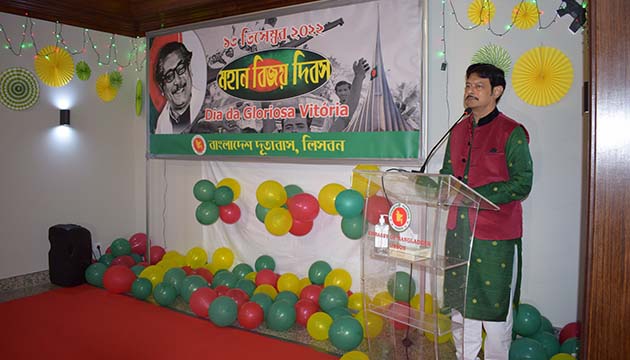 Bangladesh Embassy, Lisbon organized a daylong event to commemorate the great Victory Day of Bangladesh with due solemnity and festivity. The Chancery premises were decorated with banners, posters, festoons, balloons and colourful lights. The morning session of the programme started with the ceremonial hoisting of the National Flag of Bangladesh at the Chancery by Ambassador Tarik Ahsan in presence of all officials of the Embassy. 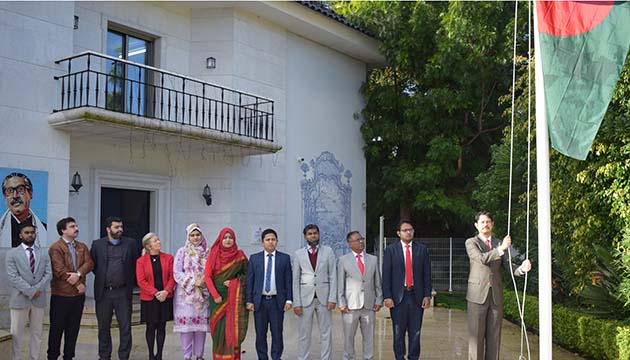 In the evening, the second session of the programme was attended by the Embassy officials with families, leaders and members of the Bangladesh community, students, journalists and cultural personalities in colourful attires. This session began with the placing of floral wreaths at the mural portrait of the Father of the Nation near the main entrance of the Chancery by the officials of the Embassy and the leaders of the expatriate Bangladesh community. It was followed by observance of one-minute silence to pay tribute to the Father of the Nation and martyred members of his family and the martyrs of the Liberation War. Messages from the Hon’ble President, the Hon’ble Prime Minister, the Hon’ble Foreign Minister and the  State Minister for Foreign Affairs, released on the occasion, were then read out by the officials.

In the discussion segment, the speakers highlighted the significance of the day in the history of Bangladesh. In the concluding remarks, Ambassador Tarik Ahsan paid homage to the Father of the Nation Bangabandhu Sheikh Mujibur Rahman, the martyrs of the Liberation War, Biranganas and the valiant freedom fighters. He viewed that the greatest achievement of victory of Bangladesh was the establishment of a country based on modern, people-oriented ideology, forsaking the regressive ideals of feudalism and communalism. He mentioned the remarkable development of independent Bangladesh and attributed it to the development of human resources of the country, which has been the result of the pursuit of the people-oriented values of the liberation struggle. Finally, he stressed the need for unity of the country on the basis of the spirit of the Liberation War for its forward journey on the path of peace and progress.

Thereafter, the audience witnessed a colourful cultural show staged by the expatriate Bangladeshi artists It began with the dance performance of the famous poem “Amar Porichoy” by the noted poet Late Syed Shamsul Haq. The audience was enthralled by the brilliant dance performances to the tunes of the song “PurboDigonteSurjoUtheche” and a contemporary patriotic song.  The forceful recitation of the famous poem “Bangla Chharo” recreated a rebellious mood of the War of Liberation at the venue of the event. 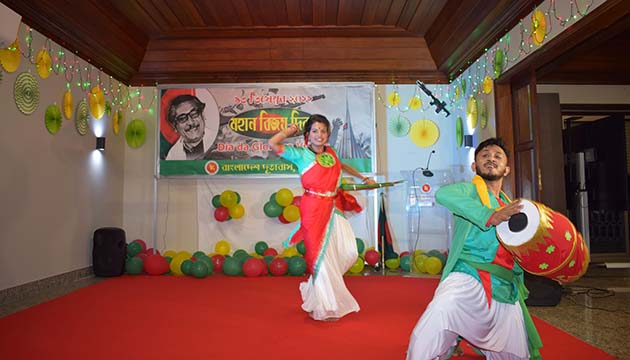 A video documentary on the liberation struggle and the emergence of Bangladesh was also screened thereafter.

A special prayer was offered for the salvation of the departed souls of the Father of the Nation Bangabandhu Sheikh Mujibur Rahman, the martyred members of his family, martyrs and valiant freedom fighters of the War of Liberation, and for the peace, progress and prosperity of Bangladesh. The event was rounded off with a serving of traditional Bangladeshi food items for all the guests. 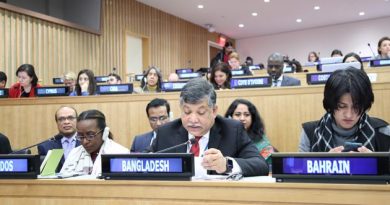 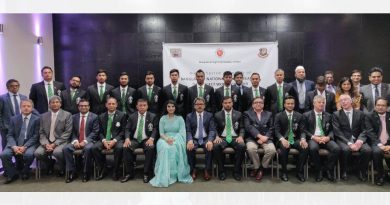 Bangladesh High Commission in London hosts a reception in honour of the Bangladesh National Cricket Team.