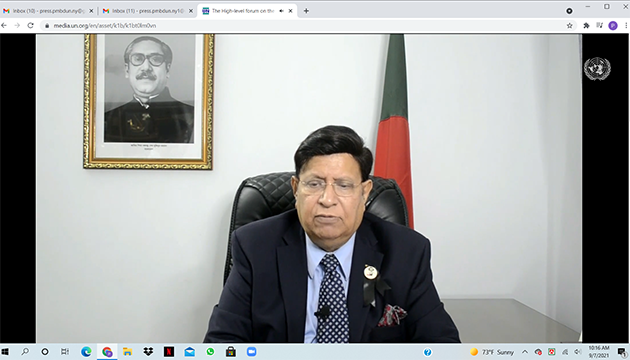 An essential component of our recovery effort from the pandemic must involve a peaceful environment in which all of us irrespective of our caste, creed, colour, race and religion can meaningfully contribute to our rebuilding efforts. There is no alternative to inculcate the Culture of Peace in our efforts to build back better in the post-COVID recovery.” said His Excellency AK Abdul Momen, Foreign Minister of Bangladesh while speaking at the United Nations High-Level Forum on the Culture of Peace held on 07 September 2021 at the United Nations General Assembly.

In his remarks, the Foreign Minister recalled Bangladesh’s pioneering role in the adoption of the UN General Assembly Resolution on the Culture of Peace since 1999 and the organization of the high-level forum since 2012. Apart from the Foreign Minister, the President of the General Assembly, High Representative of UN Alliance of Civilization, Chef de Cabinet of UN Secretary-General, and the Representative of UNESCO delivered remarks at the inaugural session.

Recognizing the need for creating an environment for peace for a resilient recovery from COVID, the Foreign Minister invited the international community to mainstream the culture of peace in all pandemic recovery efforts. He underscored the strong correlation between peace and development and in this regard, called for ensuring timely implementation of Agenda 2030.

Bangladesh Foreign Minister stated that a successful pandemic recovery must involve universal vaccination. In this regard, he referred to the unfortunate manifestation of vaccine nationalism and called the world to stand united against such vaccine inequity. “It is time for development partners to be more humane and help the deserving without discrimination. The vaccine should be a public good” he added.

While speaking at the penal discussion Ambassador Fatima stressed eliminating the digital divide and restructuring the conventional education system in ensuring uninterrupted access to education by all children. Expressing her concern at the alarming rise in inequality within and among societies, she urged the global community to address inequality in a holistic manner. She also called for increased efforts including dialogue for the elimination of hate speech, xenophobia, and discrimination across the society for an inclusive recovery.

The United Nations High-Level Forum on the Culture of Peace was convened by the President of the General Assembly, pursuant to the annual General Assembly Resolution on the ‘Declaration on The Culture of Peace and Programme of Action’ tabled by Bangladesh and adopted unanimously with overwhelming co-sponsorships. A significant number of Ambassadors and Permanent Representatives, Ministers, civil society organizations attended the Meeting and delivered statements. 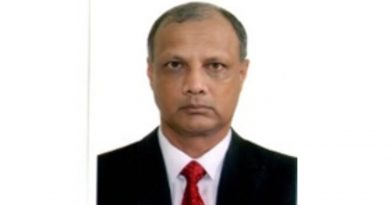 Bangladesh government-appoints Maj Gen Md Jahangir Kabir Talukder as the new High Commissioner of Bangladesh to the Republic of Kenya. 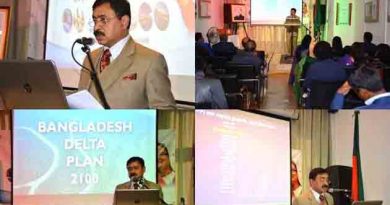