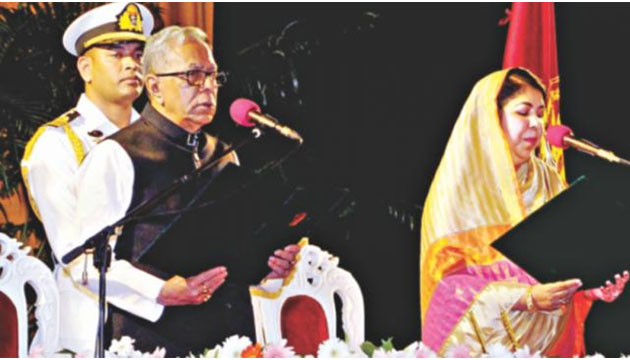 President Md Abdul Hamid yesterday took oath as the head of state for the second consecutive term at a ceremony held at the Bangabhaban. Speaker Shirin Sharmin Chaudhury administered his oath of office in presence of Prime Minister Sheikh Hasina, among other dignitaries, at the Darbar Hall of Bangabhaban.

The ceremony saw Abdul Hamid signing the oath of office after he was sworn in by the Speaker, while the cabinet secretary conducted the function.Wearing a black Mujib coat and a white panjabi, Hamid along with the Speaker entered the Darbar Hall at 7:38pm. A military band played ceremonial music at that time.The president exchanged greetings with guests after he was sworn in.

The premier, her sister Sheikh Rehana and Leader of the Opposition RaushanErshad greeted him with flowers. After the oath-taking ceremony, the premier exchanged pleasantries with the invited guests.

A veteran politician and parliamentarian, Abdul Hamid appeared as the country’s 21st president, 77 days after the Election Commission declared him elected to the presidency unopposed for the highest office.

This was the first time in the country that any person became the president for the second consecutive term.

He was earlier elected member of parliament for seven times since the country’s independence in 1971.

Mr. Md. Abdul Hamid passed the Matriculation from Nikhli G.C. High School. He obtained both I.A. and B.A. degree from Gurudayal College of Kishoregonj and L.L.B degree from Central Law College under the University of Dhaka. After completion of his education, he engaged himself in the profession of law.

Mr. Md. Abdul Hamid started his political career in 1959 by joining the then student front Chatra League. He was actively involved in the Student Movement in 1961 and while studying in college, he participated in the activities of anti Aiub movement. He strongly opposed the report of HamoodurRahman Education Commission in 1962. Due to his participation in these activities of Student Movement, he was imprisoned by the then Pakistani Government. He was elected General Secretary of the Students’ Union of Gurudayal College of Kishoregonj in 1962-63 and Vice President of the Students’ Union of the same college in 1965-66. He became the Founder President of Kishoregonj Sub-division unit Chatra League in 1964 and he was also elected Vice-President of Mymensingh district unit Chatra League in 1966-67. He had to embrace imprisonment again in 1968 as he led the student movement. He joined Awami League at the end of 1969.

Mr.  Hamid directly participated in our great Liberation war in 1971. As per the instructions of Bangabandhu, on the eve of the turmoil period of March 1971, he started mobilizing the public movement in Kishoregonj in favour of attaining the independence of the motherland. As pursuant to this trend, on 17 March he hoisted the national flag embedded with the map of independent Bangladesh in a massive gathering of thousands of people of all classes at the RathKhola field of Kishoregonj.

In the early hours of 26 March, when the Liberation War was declared, after getting that message in the morning by telegram, he actively participated in it. Subsequently, in the early April 1971, with a view to meeting the expenditures to be incurred for conducting Liberation war, he along with the assistance of Bengali military officials, collected Tk. 11.78 crores from Kishoregonj, Bhairab and Bazitpur branch of the National Bank and ultimately that amount was deposited in the Brahmanbaria branch of the same Bank which was considered safe at that time..

Afterwards, Mr. Hamid went to Agartola of India to participate directly in the Liberation War. At that time, most of the Members of Parliament of greater Chittagong, Noakhali and Comilla were staying there. He discussed with them regarding various strategies and aspects of Liberation War. Simultaneously, he interacted and shared ideas with the local public representatives and high government officials of Agortola. In the late April, he returned to Bangladesh and again went to Tekarhat of Meghalaya, Gumaghat, Panchara and reached Ballat inside Moilam with his several associates. He set up Youth Reception Camp for those who came from Bangladesh to participate in the liberation war and he was the Chairman of that camp. Mainly, primary selection of the freedom fighters was done there especially for the people coming from Kishoregonj, Netrokona and Sunamgonj to participate in the Liberation war. He was also one of the important members of Zonal Administrative Council, which was formed to administer the Liberation war and to ensure the better management of the refugees.

While performing the responsibilities of the Chairman of Recruiting Camp in Meghalaya of India, he also acted in different important capacities including the commander of the sub-sector of Bangladesh Liberation Force (MujibBahini) comprising the then Kishoregonj and Sunamgonj District. He took up all these responsibilities throughout the period of Liberation war. After the victory of Liberation war on 16 December, he organized several meetings in different camps at Meghalaya to inspire the refugees to come back home. After completion of repatriation of the refugees, he returned home on 10 January 1972.

Mr. Hamid was unanimously elected Deputy Speaker in the Seventh Parliament and he discharged this responsibility from 13July 1996 to 10 July 2001. Afterwards, he was elected Speaker and performed this responsibility during 12 July 2001 to 28 October 2001. In the Eighth Parliament, he acted as the Deputy Leader of the Opposition from 01 November 2001 to 27 October 2006.

For his outstanding contribution in our Independence and Liberation War, Mr. Md. Abdul Hamid was conferred the Independence Award-2013.

Mr. Md. Abdul Hamid is a kind hearted, sympathetic and cordial man and by nature, he is reluctant to self-exposure. He is respected to all for his natural charming and friendly behaviour.

Mr. Md. Hamid is married and he is father of three sons and one daughter.

He has an ardent interest in reading books of history and constitution of different countries and national and international political affairs.

I am a web designer and developer. 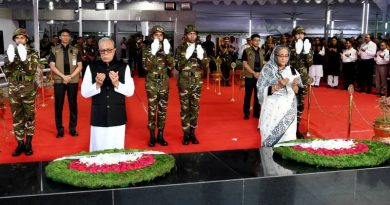 Bangladesh President and PM pay homage to Father of the Nation Bangabandhu Sheikh Mujibur Rahman marking the 43rd anniversary of his martyrdom.