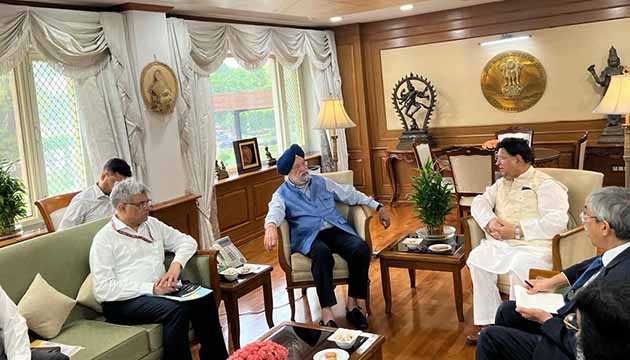 During the official visit to India, Foreign Minister Dr A K Abdul Momen called on the Vice President of India and other Ministers including the Minister of Commerce & Industry, Consumer Affairs, Food & Public Distribution and Textiles and Minister of Petroleum, Natural Gas and Housing and Urban Affairs of the Government of India at their respective offices in New Delhi.

Foreign Minister paid a courtesy call on the Vice President of India, Shri M. Venkaiah Naidu on 20 June 2022. During the call on, the Vice President expressed his satisfaction with the excellent bilateral relationship which has been strengthened in recent years. He lauded Prime Minister Sheikh Hasina for her zero-tolerance against terrorism and that bringing forth peace and security in the entire South Asian region, especially in the northeastern states of India. He also stated that the relationship between Bangladesh and India is based on mutual trust and Bangladesh occupies a special place in the foreign policy outlook of India, as both the countries are linked by shared history, culture, tradition, language and common values.

Foreign Minister Momen thanked the Vice President for giving his time for the call on. He expressed his satisfaction with the successful discussion held at the JCC Meeting. He noted that Bangladesh considers India as the closest neighbour and both the countries are working together closely for sectoral cooperation in the areas like common rivers and water resources management, IT and cyber security, renewable energy, agriculture and food security. The Vice President also congratulated Bangladesh on the economic success the country achieved in the past decade under the visionary leadership of Prime Minister Sheikh Hasina and wished for working together for further prosperity in the days to come. He particularly applauded the initiatives taken by Prime Minister Sheikh Hasina and her Government to ensure women’s empowerment and participation in the economic activities. 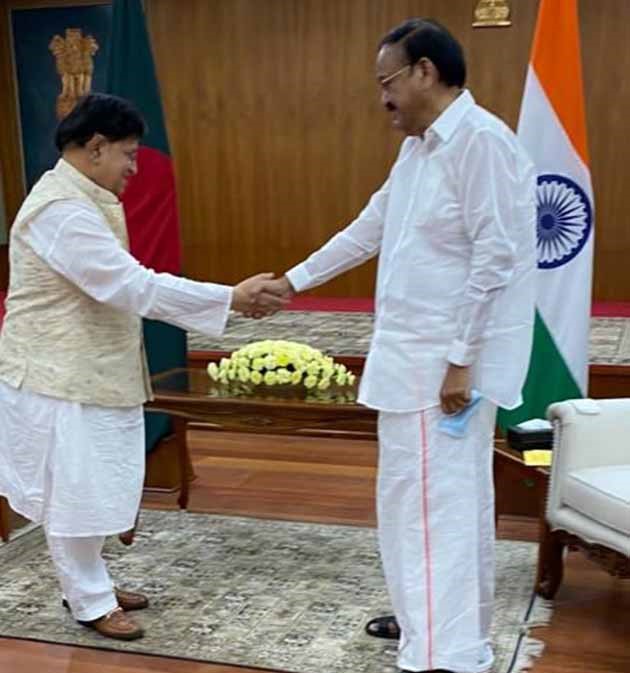 Foreign Minister also met the Petroleum, Natural Gas and Housing and Urban Affairs Minister, Shri Hardeep Singh Puri. The two Ministers discussed the existing collaboration of both the countries in the areas of energy cooperation namely- nuclear energy, renewables like solar and wind, LNG, LPG, diesel etc. They also discussed the global evolving situation with a particular focus on the energy demand and supply discourse. Both the Ministers stressed on the need to ensure energy security and energy cooperation in the sub-region. The Indian Petroleum Minister proposed to hold regular meetings and dialogues to further solidify the existing collaboration and explore new areas of cooperation in the energy sector.

Earlier on 19 June 2022, Dr Momen met the Minister of Commerce & Industry, Consumer Affairs, Food & Public Distribution and Textiles of India, Shri Piyush Goyal. Foreign Minister stated that under the dynamic leadership of Prime Minister Sheikh Hasina Bangladesh has achieved remarkable socio-economic progress during the last decade. Both the Ministers expressed satisfaction that bilateral trade has recorded significant growth during the last few years. Foreign Minister Momen stated that Indian business houses can take advantage of investing in Bangladesh, particularly in the SEZ dedicated for the Indian investors in Mongla and Mirsharai. They agreed to further deepen collaboration in trade, commerce and investment for mutual benefit.

Dr Momen is visiting New Delhi to lead the Bangladesh delegation in the 7th JCC meeting held on 19 June 2022, co-chaired by the two Foreign Ministers of Bangladesh and India. Foreign Minister held a substantive and fruitful meeting with his counterpart and other dignitaries of the Government of India. He is scheduled to return to Dhaka on 20 June in the evening. 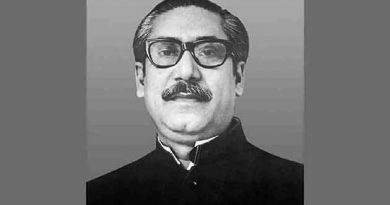