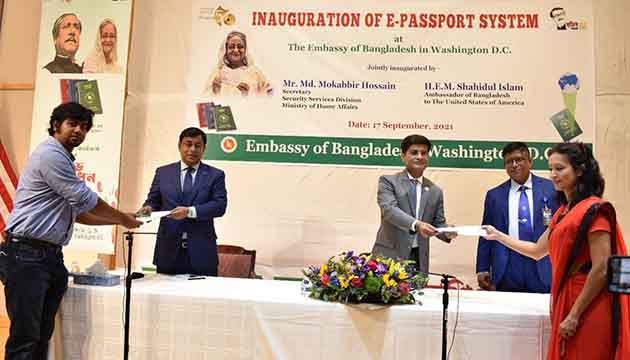 The Embassy of Bangladesh in Washington D.C has introduced electronic passport (e-passport) services today for catering to the needs of the Bangladeshi diaspora in the USA. Ambassador of Bangladesh M Shahidul Islam and Secretary of Security Services Division of the Home Ministry Md. Mokabbir Hossain jointly inaugurated the services at the Embassy in Washington.

Secretary of Security Services Division Md. Mokabbir Hossain while speaking in the event, stated that e-passport being the latest technology leaves no chance of fraudulence and hence it will be appreciated by all countries. He highlighted that many developed countries have not yet been able to implement this e-passport system and Bangladesh is the first in South Asia to do so. The Secretary also mentioned that synchronizing with the e-passport system, the government has already established e-Gates in the international airports of Dhaka, Chittagong, and Sylhet which will ease the immigration procedures of passengers.

Bangladesh Ambassador to the USA underscored the visionary leadership of the Honorable Prime Minister for successful implementation of e-passport service as another landmark event of her attaining-“Digital Bangladesh”. He hoped that the introduction of e-passports, in the year of the 50thanniversary of our independence and the Birth Centenary of our Father of the Nation Bangabandhu Sheikh Mujibur Rahman, would reduce the sufferings of Bangladeshi diaspora living all over the world. He also stated that as pledged by the Government, the progression of this service from hand-written to electronic took a short span of time. He emphasized the effective coordination between the Department of Immigration and Passport (DIP) and the missions abroad for rendering optimum services to the Bangladesh diaspora. The Ambassador thanked the Security Services Division and Department of Immigration and Passport (DIP) for considering the commencement of e-passport services at the Embassy of Bangladesh in Washington D.C as well as two Consulate General offices in New York and Los Angeles at the initial phase of introducing the new system.

Project Director of the e-Passport project, Brigadier General Mr. Saidur Rahman Khan noted that after the inauguration of the e-passport system by the Honorable Prime Minister on 22 January 2021, the Department of Immigration and Passport (DIP) has already distributed 10 lakh e-passports in the country.  He also mentioned that all the passport offices of the country were brought under the e-passport system at the end of June 2021 and now the system is being extended to Bangladesh missions abroad.

The electronic passport (e-passport) system was officially launched by receiving two application forms by two applicants. It may be mentioned that the e-passport system was earlier inaugurated in the New York Consulate on 10 September and the Embassy of Bangladesh in Washington is the fourth in line after introducing it in Berlin and Athens. 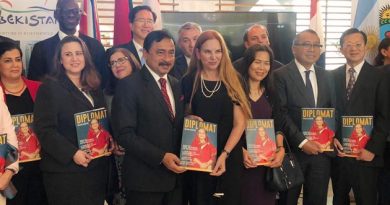 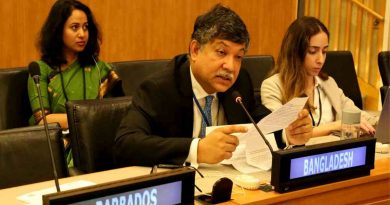 Bangladesh is committed to promoting inalienable right of people across the globe to their mother languages, importance of linguistic and cultural diversities, says Ambassador and Permanent Representative of Bangladesh to the UN . 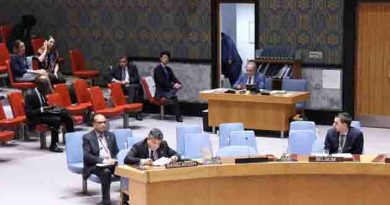