The new Ambassador of the State of Kuwait to Bangladesh Faisal Mutlaq Al Adwani paid a courtesy call on with the State Minister for Foreign Minister Md. Shahriar Alam, MP today at his office in the Ministry of Foreign Affairs.

The State Minister welcomed the Envoy in his office and congratulated him on his assumption of new assignment as Ambassador to Bangladesh. He expressed happiness at the excellent bilateral relations between Bangladesh and Kuwait in the political, economic, defense, manpower, and trade fields and urged the Ambassador to draw initiatives to strengthen the relationship by exploring new and emerging areas of collaboration including energy and health sectors. He then highlighted some recent transformations that have taken place in Bangladesh under the leadership of Prime Minister Sheikh Hasina in the socio-economic sectors including the construction of the Padma Bridge, the Karnafulli tunnel, Metro-rail projects; the Express Highway, etc. He also urged the Ambassador to undertake visits to various places in the country IT Parks, Economic Zones, etc. to look for investment opportunities in Bangladesh. Upon inquiry of the Ambassador on the Rohingya issue, the State Minister apprised him of the current state of the problem and sought the Kuwaiti government’s political and economic support for solving the Rohingya crisis.

The Ambassador commended the Bangladesh government’s quest for development and peace in its strides toward economic emancipation and appreciated the capable and courageous leadership of the Prime Minister. The Ambassador conveyed the Kuwaiti government’s eagerness to work more closely with Bangladesh in areas of mutual interest. 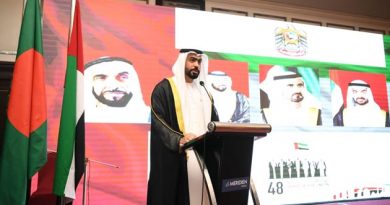 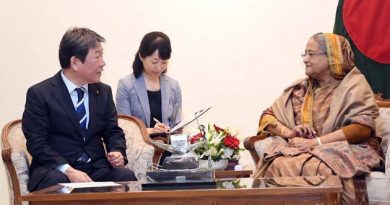 Japan will continue its support to Bangladesh in the key development arenas, showing interest to invest in the IT sector of Bangladesh : Japanese minister – Toshimistu Motegi.