Bangladesh Embassy in Japan today observed the National Mourning Day – 2021 and the 46th Death Anniversary of the Father of the Nation Bangabandhu Sheikh Mujibur Rahman in a respectful and solemn manner to pay tribute to the greatest leader of all time of the Nation.

The first part of the program began in the morning at the Embassy premises while the national flag was hoisted half-mast by the Ambassador of Bangladesh to Japan, H.E. Shahabuddin Ahmed. State Minister for Youth and Sports –H.E. Zahid Ahsan Rasel M.P. was present at the event as chief guest.

Later at the Bangabandhu Auditorium State Minister for Youth and Sports –H.E. Zahid Ahsan Rasel M.P. and Ambassador Ahmed paid homage to Father of the Nation Bangabandhu Sheikh Mujibur Rahman by laying a floral wreath at the portrait of Bangabandhu followed by observance of one-minute silence.

The next part of the program was conducted virtually following the COVID-19 health protocol where officials of the embassy and expatriate Bangladeshis took part. It started with offering special prayer (munajat) for the peace and salvation of the departed souls of Bangabandhu and his family members. Messages of the Honorable President, Honorable Prime Minister, Foreign Minister, and State Minister for Foreign Affairs issued on the occasion were read out to the audience.

At the online discussion State Minister Zahid Ahsan Rasel M.P. discussed the ideology, work, and life of Bangabandhu Sheikh Mujibur Rahman – the visionary leader of all time. He paid deep tribute to Father of the Nation Bangabandhu Sheikh Mujibur Rahman along with Bangamata and his family members. State-Minister said that the defeated force of 1971 who did not accept the independence of Bangladesh was the mastermind for the assassination of Bangabandhu and his family members. The Minister applauded the dynamic leadership of Prime Minister Sheikh Hasina who made Bangladesh a role model of development. He also praised the support and cooperation of Japan in achieving the desired development of Bangladesh.

In his opening remarks, Ambassador Ahmed said that Bangabandhu Sheikh Mujibur Rahman was the savior for the Bengali nation who steered the whole nation towards freedom and founded the roots for his people to live with dignity and sovereignty. He expressed with firm determination that despite the absence of Bangabandhu, we would follow his ideology and materialize the ‘Vision-2021’ and ‘Vision-2041’ declared by Prime Minister Sheikh Hasina and build the “Golden Bengal” dreamt by the Father of the Nation.

Later, expatriate Bangladeshis living in Japan participated in a discussion on Bangabandhu’s life and works and development vision. A video documentary on the life and works of Bangabandhu was also screened at the program. 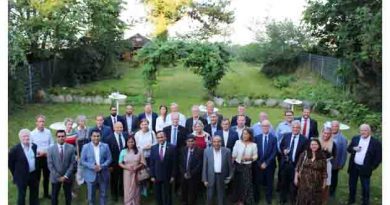 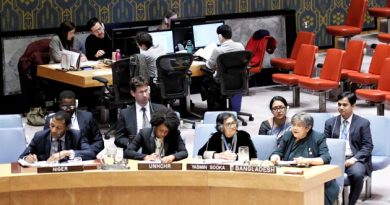