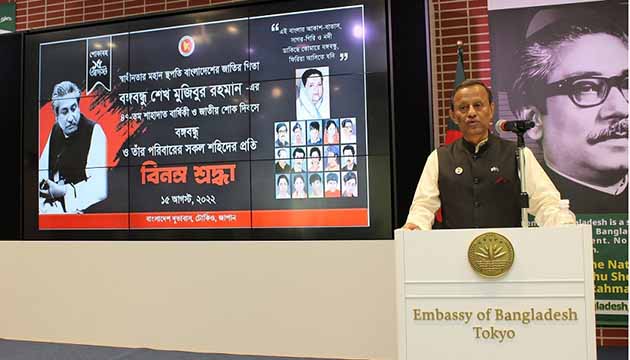 Bangladesh Embassy in Tokyo has observed the National Mourning Day and the 47thAnniversary of the martyrdom of the great architect of Bangladesh’s independence, the greatest Bengali of all time and Father of the Nation Bangabandhu Sheikh Mujibur Rahman paying deep respect in a solemn manner.

The program began in the morning at the Embassy premises with the hoisting of the national flag at half-mast by the Ambassador of Bangladesh to Japan, Mr Shahabuddin Ahmed. The national anthem was played at this time. After this, a one-minute silence was observed followed by a special down and munajat for the salvation of the martyred souls of the Father of the Nation Bangabandhu Sheikh Mujibur Rahman, his family members and all other martyrs of15th August in 1975 with the participation of all Embassy officials and expatriate Bangladeshis. 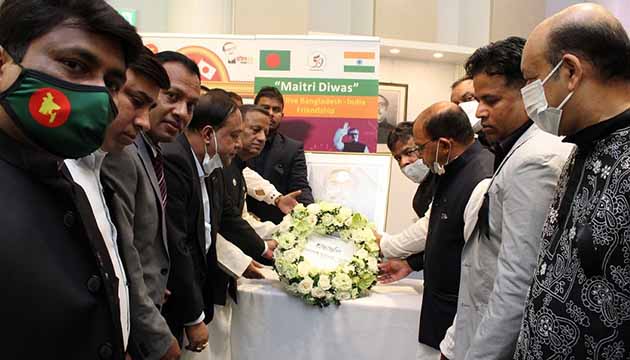 Later at the Bangabandhu Auditorium, Ambassador Ahmed followed by other participants paid the deepest homage to the Father of the Nation Bangabandhu Sheikh Mujibur Rahman by laying a floral wreath at the portrait of Bangabandhu. Messages of the Hon’ble President, Hon’ble Prime Minister, Foreign Minister and State Minister for Foreign Affairs issued on the occasion were read out to the audience.

In his remarks, Ambassador Shahabuddin paid profound homage to the greatest Bengali of all time and Father of the Nation Bangabandhu Sheikh Mujibur Rahman as he dreamt of freedom of his Bengali people and their independent statehood. Under the visionary, fearless and strong leadership of the Father of the Nation, the Bengali Nation was united to forge a struggle for independence and fought a liberation war to attain an independent country, Bangladesh and a national identity, Bangalee, at the global stage. Immediate after independence, under his leadership, Bangladesh joined all major international and regional bodies and established bilateral relations with a large number of countries including Japan thus firmly establishing Bangladesh’s place on the world stage. Bangabandhu is not with us today, but his dream, ideals and directives are still guiding us on the pathway to the emancipation of Bangladesh. Under the leadership of his daughter and Prime Minister Sheikh Hasina, Bangladesh will implement the Vision 2041 to build a poverty-free, modern and developed country as dreamt by Bangabandhu as his Sonar Bangla, Ambassador expressed his resolve. 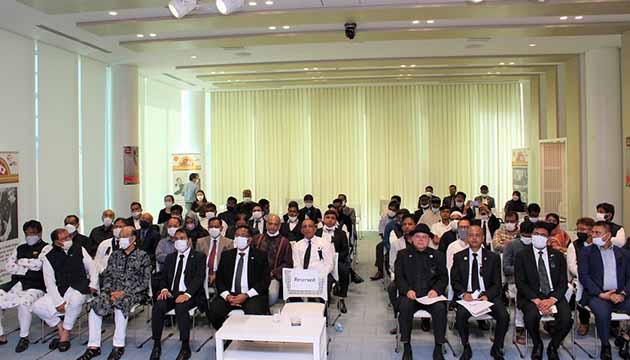 A discussion on the significance of the day was held following a documentary screening on the life and work of the Father of the Nation Bangabandhu Sheikh Mujibur Rahman. In this segment, a significant number of Bangladeshi community members and professionals working in Japan highlighted the significance of the day and vowed to turn the grief of losing Bangabandhu into strength to work unitedly in strengthening the hands of the Hon’ble Prime Minister Sheikh Hasina to further develop the country and fulfil the dream of Bangabandhu to create ‘Sonar Bangla’. 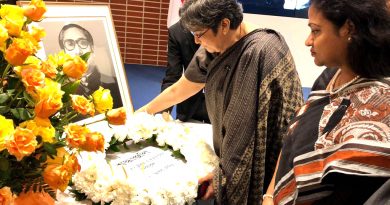 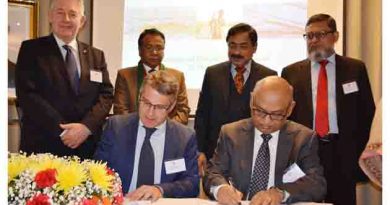 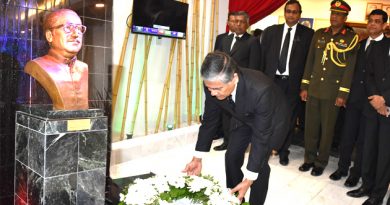 National Mourning Day-2018 observed in Washington with renewed pledge to build “Sonar Bangla” dreamt by Father of the Nation.