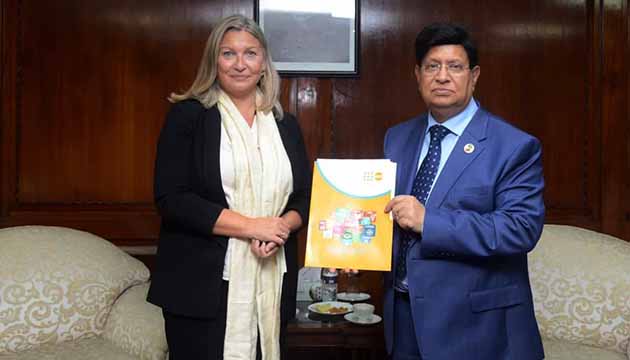 The newly appointed Country Representative of United Nations Population Fund (UNFPA) Ms. Kristine Blokhus, and UN-WOMEN Country Representative Ms. Gitanjali Singh, presented their credentials through separate calls on to Foreign Minister Dr. A. K. Abdul Momen, MP today at the Ministry of Foreign Affairs. Foreign Minister welcomed Ms. Blokhus and Ms. Singh to Bangladesh and expressed deep appreciation for the long-standing cooperation between the Government of Bangladesh and the two UN agencies in the socio-economic development of the country. 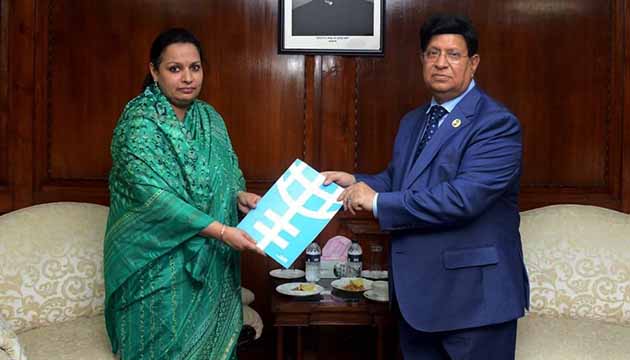 Foreign Minister Momen, during his separate discussions with two Country Representatives, highlighted Bangladesh’s success story in effectively combating the COVID-19 pandemic, underscoring the low number of deaths and the widespread vaccination programme despite having initial difficulties. He also recalled Bangladesh’s commendable success in population control through public awareness building at the grassroots level without imposing any mandatory restrictions. He sought for UNFPA’s support in undertaking a similar awareness program among forcibly displaced Rohingyas in camps in Bangladesh. With UNFPA Country Representative, he also underscored Bangladesh’s success in the health sector at the grassroots level through community clinics. He expressed concern about the fact that poorer section of the population is still having a larger family size, and requested UNFPA to work in this area. Foreign Minister Momen also expressed concern, with both Country Representatives, about the still prevalent scourge of early marriage, and requested concerned UN agencies to assist the Government in curbing this. He also highlighted the sufferings of the people due to the ongoing flood situation in the country; and requested UN agencies’ support, through their respective mandates, in the mitigation of adverse effects of natural disasters. With the UN-WOMEN Country Representative, Foreign Minister Momen also underscored the unparallel success Bangladesh has achieved in women empowerment under the visionary leadership of Prime Minister Sheikh Hasina; citing that presently 69 Hon’ble Parliament Members are women apart from more than 14 thousand elected women representatives at the local governments. Highlighting Bangladesh’s success in significantly reducing maternal and child mortality, he called upon to both UNFPA and UN-WOMEN to continue assisting the Government in this area. With UN-WOMEN representative, concerning violence against women, underscored that the rate of such crimes is much lower in Bangladesh compared to a number of developed countries. In this regard, he also underscored the need for building awareness among both women and men. Bangladesh Foreign Minister, recalling that Bangladesh undertook a proactive role in creating UN-WOMEN, observed that the country office needed to be further upgraded in terms of personnel. He also requested both the UN agencies to remain responsible and proactive in discharging their respective responsibilities and wished successful tenure for both the Country Representatives.

Both Ms. Blokhus and Ms. Singh praised Bangladesh’s admirable socio-economic progress in recent years and expressed willingness to work with the Government in further carrying forward the strong collaboration between Bangladesh and the UN system. 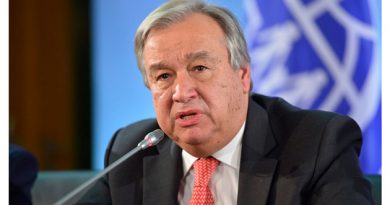 UN chief calls for increased, concerted and global action to end female genital mutilation and fully uphold the human rights of all women and girls.