The President of the 76th Session of the General Assembly, Mr. Abdulla Shahid convened the General Assembly’s annual High-Level Forum on Bangladesh’s flagship resolution on ‘Culture of Peace. The Forum gathered a large number of Member States, representatives of the United Nations, and other intergovernmental entities and civil society.

The theme for this year’s event was“The Culture of Peace: Importance of justice, equality, and inclusion for advancing peacebuilding.”The inaugural session was addressed by, among others, the Assistant Secretary General of the Peacebuilding Support Office, the Secretary General’s Envoy on Youth, and the Rector of the University of Peace. The forum also featured a plenary session for the Member States and a panel discussion, which was chaired by Ambassador Anwarul K. Chowdhury, and participated by expert speakers from the UN and civil society.

Ambassador Muhammad Abdul Muhith, Permanent Representative of Bangladesh to the UN, recalled Bangladesh’s historic role in mooting the notion and steering the General Assembly resolution on ‘Culture of Peace.“From the very moment of our birth as a nation, we have committed ourselves to building of world order, in which the aspiration of all men for peace and justice will be realized. This very commitment guided us in 1999 to introduce the GA resolution on Declaration and Programme of Action on a Culture of Peace and also shaped our enduring commitment to the cause of global peace”, the Ambassador said.

Ambassador Muhith also highlighted the continued relevance of the culture of peace in advancing peacebuilding. “The current peacebuilding architecture of the UN offers a viable means for the promotion of positive peace. It promises to prevent the outbreak, escalation, continuation, and recurrence of conflicts and end hostilities by addressing their root causes. This requires efforts towards transforming attitudes, institutions, and structures that lead to peaceful societies,” he added.

The speakers, both at the plenary and at the panel discussion, lauded Bangladesh’s leadership in promoting the notion of culture of peace for over two decades. They also recognized the renewed importance of the culture of peace in the context of current global challenges accentuated by the COVID-19 pandemic and ongoing conflicts.

We have to protect our heritage, our culture, our existence says Ambassador Masud Bin Momen, the Permanent Representative of Bangladesh to the UN. 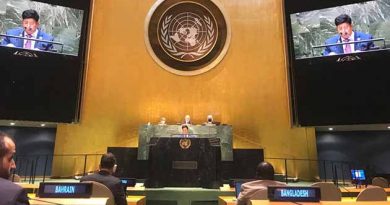